Halfway between here and there

For all the major milestones and firsts in a child’s life, perhaps none of them are as big to a parent as the day of birth and the short time between then and the first birthday. But, between each of those two major milestones, are dozens of big milestones and for each of those dozens more minor events. For instance, the first night the kid sleeps through the night, or the shock of the parents’ when he suddenly can drink nearly twice the amount of milk in a bottle than he did the week before. And then there are the little things that are hardly milestones but make a parent proud.

Six months is a pretty major milestone. We’re just far enough past the newborn stages that much of the daily aspects of raising him no longer seem nearly as laborious. He’s far from independent, but at least a few times a day we’re able to give him a toy and he can keep himself occupied for a few minutes while we eat dinner or gather stuff for an outing. He’s also strong enough now that when you pick him up or are holding him, it’s far less of a chore since he’s able to assist in the process.

While most parents seem to wait until their child hits the 6 month mark to begin introducing food, we tend to be over achievers and decided to start trying food early. The little man was showing all the signs of being ready for solid foods early. His constant chomping while we were eating, not to mention his extreme interest in our food, were just a few of the initial signs that told us he was ready to start. Rather than start with sugary and processed “baby food” that is based on rice, we started on fruit, or more specifically the single greatest berry (at least to Californians): the avocado.

The first few attempts were real small amounts, only a few teaspoons, and I’m pretty sure more of it ended up on him then in him. His second food was pumpkin, and while I expected to have a bit of an uphill battle with the new food, it seemed the only thing that got him to eat pumpkin was if it was mixed with twice as much avocado as pumpkin. I’m sure we’ll have a few foods that require a little avocado comfort mixed in, but so far he’s taken to eating solid foods far better and faster than I anticipated. In fact, he is already to the point where he misses it if we aren’t able to give him some avocado because we are out. The next few foods we try and give him will hopefully lead us to some easier to carry with us foods, and we’ll begin ramping up how much food we give him.

It’s hard to believe that only 6 months ago we were in the hospital getting the news that he was coming early, and now all these months later, I couldn’t imagine what we did before he was here. I wouldn’t trade it for the world. 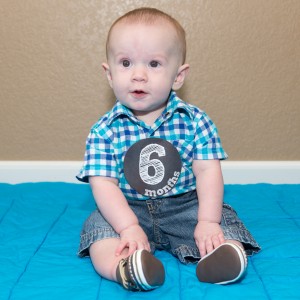 Expectations for the kid

When you first find out that you’re about to be a dad, a lot of thoughts run through your head. Once you get over the initial shock and happiness, you suddenly start thinking of all the things this means. Sleepless nights, bodily fluids, and all the other things that go with raising a newborn. Then, maybe the first or second night of not even knowing what day it is, your mind starts to wander. What’s he going to be like when he hits school age? What will his interests be and will any of them overlap with mine? What’s his first vehicle going to be (it’ll have a seven slot grill if I have anything to say about it), and will he be a good driver?

All of that comes and then you realize, once you’ve caught up a bit with sleep, that you have to learn to temper your expectations and even aspirations. Ultimately, his interests, goals, and life path will eventually be out of your hands, and you just hope you’ve put him on a path that will let him meet his own goals and aspirations.

One thing that has dramatically changed seems to be the overall expectations of parents, more specifically the challenging of traditional gender roles. I think there’s a lot of reasons that the traditional gender-based divisi 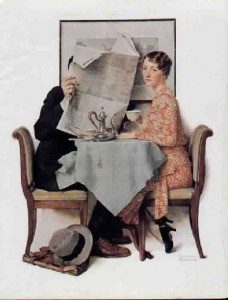 on of household labor (or maybe more appropriately the lack thereof) is one rooted in expectations. The expectation used to be that a woman stays home, and therefore would naturally be the one to raise the kids, and performed the other duties of running a household. But, as time has changed, the “traditional” picture of a family is no longer the one you’d see in a Normal Rockwell painting. And I think that is for the better. Children, and I’d even say especially little boys, though I’m sure girls benefit from it as well, need to have a strong male role model that does more than read the paper at night after dinner and dole out the corporal punishment. Not only are many families more or less required to be a dual-income family, but that has also meant a new division of labor around the house.

I would imagine just a few generations ago (or maybe not even that long ago), the male breadwinner coming home and making dinner, doing the dishes, changing a diaper, and putting the kid to bed not only wouldn’t be expected, but he probably wouldn’t even have had any experience with half or more of those tasks. Try as I might, I still get somewhat surprised when someone of my parent’s generations are taken aback by me changing a diaper voluntarily, or by the look I get when I say I’m in the middle of my 9 week leave from work for taking care of the kid (and that I could have taken 12 weeks).

This also means that I get first hand knowledge and experience with what it takes to raise a kid at home. There are some days where it feels like a victory to even have had the time to take a shower before dinner time, and other days I feel extremely accomplished even though I can’t name more than a few items I did that day. While I think more people understand that the one that is home raising the kids and running the house isn’t a walk in the park, there is absolutely zero chance of me ever asking Kim what she did all day when the kid is young and at home. It’s unfortunate that more don’t get to have this experience.

I couldn’t imagine not being able to spend this much time with my son, and only wish it could be longer and with his mother at the same time. It’s so awesome to be able to spend time with him one-on-one. I know it will be very hard for me to go back to work full time, but I know it’s necessary. He’s such a great little kid, and even if he doesn’t grow up liking the same things I do, I know he’ll still be a fantastic little gentleman that I couldn’t love any more if I tried.

As we begin the second of my nine weeks on paternity leave, I’m starting to get a clearer picture of what it’s been like for Kim these past few months. While I’m sure looking after a 5 month old brings different daily challenges as looking after a 1 month old, I’m realizing just how much work it actually is.

We’ve been lucky enough to have a kid that loves his schedule. The day following his second full night of sleep, we started a schedule for feeding, that has given way to a basic schedule for other functions, like regular diaper changes, naps, play times, baths, etc. By far the biggest obstacle to having any sort of normal life – for instance going to dinner, meeting up with friends and family, or anything else that requires coordination with people other than the 3 of us – was his feeding schedule. By far the most common conversation Kim and I had during the first few weeks was “when did he eat last and when do we think he’ll eat again”.

Once we started a schedule, we had to stay on schedule. That required us to wake him to stay on track, but trust me, it was totally worth it for us. Other parents have given us the whole “never wake your child” advice, but knowing that he’ll be hungry within 10 minutes of 7pm is worth far more than an extra 15 minutes of a sleeping baby. And this extended far beyond just when a bottle would be needed. Bath time starts with enough time to bath, brush gums, clean ears and belly button, change clothes, and grab a bottle before the hunger really sets in at 7. Since the schedule went into effect, we went from baths being an event filled with hungry crying to a fun time for the three of us to play in the water (and get clean of course).

But now that’s all about to change. Up until this point, this schedule has worked really well because he’s been on milk exclusively. Smaller bottles that are given more frequently throughout the day worked well because they were predictable and easy to plan for, but our little man is growing and his needs are changing. We started noticing that occasionally he’d finish a small bottle, and be perfectly fine and continue on with his day, while other times the end of the bottle brought some whines before he was given a pacifier. We knew he was getting enough to eat overall, but the schedule wasn’t allowing for natural variations in what his body was telling him he should have. Now that he’s older and we’ve got a bit more understanding of what his whines mean, it should be easier for us to figure out what he needs.

From here on out, he’ll be assisting with when it’s time for a feeding, which we hope will help make our nighttime routine a little less of a late night slog.

By far the single most daunting task I thought I would have while watching him full time was the entertainment aspect of his daily routine. Changing diapers, cleaning bottles, feeding, cleaning drool off of things, all of that I thought would be the simple part of watching him full time. It’s the stuff in-between that I was most worried about. What if the tummy time/floor time/toy time was a disaster and it wasn’t nap time, what would I do then? How long can he actually stay in any one mode before becoming completely bored, and would I readily have something else for him to do when he did get bored?

So far, it’s not been quite as challenging as I thought. Between play mats, toys, floor time, swing time, jumper time, walker time, nap time, and bottle time, he pretty much just makes rounds through all of his stuff. Sometimes longer in one than the other, sometimes things just get skipped altogether, but for the most part, he’s just a fantastic little fun kid. I can’t believe how far a little floor time with a toy will go, especially with all of his laughter keeping me entertained as well.

Our little family is going through a little bit of change right now, but so far the kid has been taking it like a champ. It seems even when he’s not in a good mood, he’ll still let a smile pass through the whining, even if just for a moment. I sure do love that little man.