There have been very few moments over the course of the last 10 months where I’ve really been able to pause and have one of those “I guess I’m a father now” moments. There’s been little instances where I’ve been with other parents and the conversation turns to topics that include stool consistency, Bubble Guppies, sleep patterns, and milestones. All topics that I never would have thought I’d be earnestly participating in, but that sneak up on you as the kid gets older.

Recently though, and likely due to the holidays, it’s hit me just a little bit more that I have a little person that is completely dependent on me. Last year at Christmas we were still thinking about and preparing for a kid that was still months away. Instead of thinking about how little sleep we might be getting once he was here, I now have this little man that crawls and stands and walks and drools everywhere. While I still occasionally wish he wasn’t quite so mobile and that I could leave him in the center of the room without worrying about my laptop falling off the couch, I just love seeing the sense of amazement and accomplishment in his eyes.

His individuality is a bittersweet inevitability. All you have to do is look around our house at the growing collection of various gates, walls, and increasingly barren surfaces that are about three feet and below to see just what I mean. I’ve joked that you need an engineering degree to get around our house, and that’s not far from the truth. We even had to migrate our Christmas tree from its placement of the last 7 years (which has now been re-established as a play area for Hayden) to the living room. This means that in order to keep curious hands away from the lights, ornaments, and presents, a large fence has been erected around the Christmas tree. In a way, it looks a bit like the tree has been incarcerated rather than protected.

So between the Great Wall of Baby being installed around the house, the more barren lower surfaces, and the ever increasing splay of blocks and toys about the room, we’ve fully settled in to having a kid. A lot has changed since the days of putting finishing touches on the nursery and attending a baby care class. The terror of “are we even ready for a kid” has quickly turned into “what did we even do all day before we had a kid?” and I’m just fine with that. 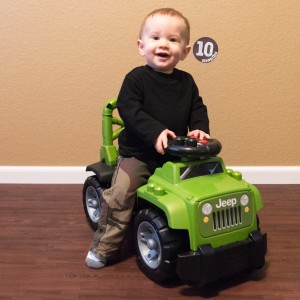