As we near the end of Hayden’s first year, I’ve started to have these little surreal moments with him. Little things have been making a big impact on me lately. I can’t tell if this is one of those instances where I’m longing for him to stay little forever, or if the little discoveries he makes every day are a promising look into the future that I will enjoy with him, but I can say I just can’t stop smiling just thinking about it. I’ve said before that his personality is beginning to take shape, and that certainly holds true this month.

One of the greatest little things he’s been doing lately is his insatiable need to be a little daredevil. Whether it’s crawling over his mom or I laying on the floor, going out of his way to crawl over the lower end-table supports, or attempting to climb any amounts of people, dogs, or toys to get to something just out of his reach, the more heart-stopping for his mother, the more inclined he is to attempt it. One of the most fun parts of this, at least for me, is the look he gets on his face right when he decides to attempt something daring. Usually it begins with him sizing up the obstacle, sitting back and catching the eye of myself or Kim, usually just out of the corner of his eye, and then a wry smile as he leaps into action. And when I say leap, I mean he really jumps from that sitting position as far forward as he can.

The other great thing he’s been doing lately is more in-depth problem solving and discovery. Watching him with water is especially entertaining. During the bath, which is one of his favorite activities, he’ll attempt to figure out what the soap bubbles are and attempt to pop all of them in the bath. While he’s never been successful at getting rid of all of them, he certainly gets me plenty wet in the process, which seems to make him just as happy if he were to be successful. Add to that the strange origin of the water (aka bathtub faucet) and his seeming inability to grab streams as they slip through his fingers, and you’ve got a good picture of what bath time looks like for us. I think I’m pretty excited about watching him continue to discover the world around him 🙂 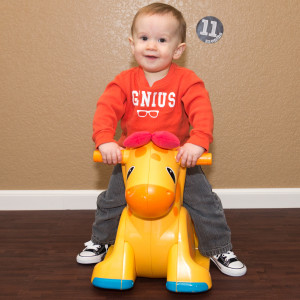