I can’t believe I’ve had the privilege of calling this little boy my son for a whole year. When we first found out that Kim was in fact pregnant a flurry of emotions came over me. First there was the excitement of having a kid. The self-congratulatory nature of hitting the bullseye as quickly as we did sure didn’t hurt with the excitement. Next was the sudden rush of feeling like we had countless things to do, buy, and build before he or she got here. Then the overwhelming list of things that Kim could and couldn’t eat or drink or do while pregnant. The anxiety and joy of spreading the news to family and friends. Months of morning sickness, countless doctor appointments, and hours of wandering around Babies ‘R Us wondering why things cost so damn much. As things got closer to the finish line, I started feeling like I just wanted things to happen already; I was tired of waiting for the whole thing, and was anxious to get started knowing my son.

Then there was Thursday, February 20th, 2014. We had both taken work off for yet another prenatal appointment. Kim’s sciatica was worse than ever. We had already got the car packed as a “just in case” measure, and even took the camera and laptops with us. The moment that the OB/GYN told us we had to head over to labor and delivery to get a “non-stress test” (which, let me tell you, is incredibly stressful for everyone involved), it suddenly hit me. We were close to the finish line, even though we didn’t yet know how close we actually were. Suddenly the months of time between when we found out that Kim was pregnant seemed like it wasn’t nearly enough time. How could we possibly be prepared to be parents? Just because we had a breast pump, crib, and a car seat, these people were going to deliver a baby and then hand it over to us, as if we knew what we were going to do once we got home.

Shortly after we got settled in our room, the idea of not being ready quickly subsided, but wasn’t completely subdued. We had medical issues to deal with, centimeters to count, as well as friends and family to keep updated. Then, things very suddenly and rapidly picked up. Within moments we went from wondering where and when things were going to progress to there being a flurry of activity in the room.

And then he was here.

While I’d be lying if there weren’t moments since his first breath of air and that first shallow cry that we weren’t completely over our heads, the three of us survived and have countless memories that we won’t soon forget. We’ve passed countless milestones, from the moment he could hold his head up on his own to most recently walking more and more on his own. I honestly look forward to seeing and playing with this little man each day. Long and stressful days at work, hours of traffic and commuting, and all the rest all melts away the second I open the door and walk in from the garage and have his little semi-toothless smile staring back at me while laughing and just being excited for me being home. It’s by far one of the greatest feelings ever.

So as I sit here, a year after that jarring yet wonderful night, Hayden asleep in his crib after a long weekend with family and friends, I can’t help but think I’m the luckiest dad in the world (that still feels weird to say). 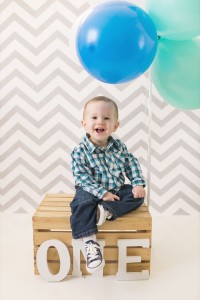 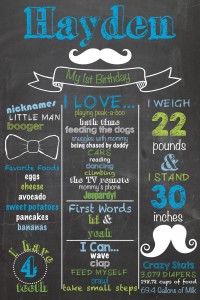 Craziest stats over the last year