There’s nothing like a holiday to help you think back to where we all were a year ago (and to help remind me to post again after two months off). Last year Hayden was young enough that holding his head by himself for long periods of time was challenging. We were still early in scheduling our lives around 3 hour feedings, and it seemed like we were just getting in the groove of being parents. Now, a year later, we’re working on fork control (he’s surprisingly good) and not chasing the dogs too much (they get tired far faster than I would have thought).

A year ago, we could barely comprehend what had happened over the last few months, and this year we wouldn’t have life any other way. There’s something about the way that a toddler keeps you on your feet every moment that he is awake that is simultaneously exhausting and invigorating. I’ll admit that there are times where coming home with some takeout and enjoying a beer that isn’t being held out of reach of curious little fingers while something on TV that is decidedly not child friendly sounds like the exact right way to button up the day. But, when I get home and the smiling little face of my son goes running off to hide in an invitation for me to chase after him, I realize that I wouldn’t trade that for hours of beer and TV.

Lately it’s become far more obvious that we are dealing with a toddler and not an infant anymore. It feels like it wasn’t so long ago that keeping him away from something that we’d prefer he not play with was as simple as just pointing him in a new direction. Now, when we ask him to not do something, we may be find that he agrees and moves on to something else, or he’ll shake his head “no” in acknowledgment, or sometimes we’ll get one of those smiles that only a toddler can give. This smile might be an indication that things are about to get far worse, but more likely than not with our little man it means that he knows we’d rather him not do what he’s doing. He’ll try one more time to make sure we’re serious, and then either invite us to chase him away (fun!) or proceed on to the next thing which may or may not repeat the cycle.

As a parent that sees your child everyday, it’s not always simple to pinpoint major changes in personality or mannerisms. Most of these transitions occur as a natural progression. Once I’ve realized that some change has occurred, I seem to find it far more entertaining to observe its current form instead of its path to existence. Just today, while Kim was in the kitchen doing some dishes and I was watching Hayden. He went up to one of the end tables in the living room and started reaching for the baby monitor receiver. It’s placement was nothing new, but his hight and reach put it far more comfortably within grasp than before. When calling his name to ask him to not play with it, his reaction was to immediately put both hands down and start to look around for which parent caught him in the act. The look on his face as he scanned the room hinted far more at the fact that our little baby was now well on his way to full toddlerism. 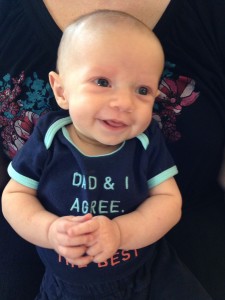 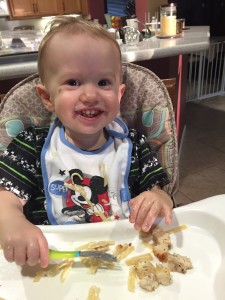