There are a few things that everyone tells you shortly after telling people that you are having kids. They tell you about the sleepless nights, the early mornings, and the joys of baby proofing a house. Sometimes, as a parent, you get lucky on a few of these items. In our case, we’ve got a kid that loves to sleep at night, and given the chance will sleep in long enough some mornings that we wake up on our own and wait for him to come around. Baby proofing so far has been a very different experience for us. Don’t get me wrong, we knew that we had maintained a less than baby friendly environment, but I was at least expecting that baby proofing would have been more gradual.

For instance, we thought he’d start rolling around well before we ever got to a crawl. That would bring with it the job of containing the little bug to a safe-to-roll area. Next would be crawling attempts at the end of the rolls, and again we’d expand out our baby proofing to accommodate. Finally, more ernest crawling would take place, and overall containment and crawl-height items would be of concern such as power outlets. Later, hopefully much later, would be walking (and falling) that we’d have to contend with.

In our case, rolling was never his thing, and his early crawling was more of spinning on his stomach with very little horizontal movement. This meant that when he finally started crawling he went from not crawling on a Thursday, to crawling in short bursts on a Friday, and by that Sunday the dogs were running to keep away. It’s one thing to have a baby that goes from not crawling to crawling everywhere over a short period of time, but it’s a very different case when Amazon can’t get your items to you fast enough to contain the little speed demon. This also means that we didn’t get to slowly build up our defenses, and instead had to scramble to keep him out of trouble.

Even worse than that, he’s trying to get to the walking stages well before we could possibly be ready for that. I’m sure many kids would avoid certain large obstacles put in their paths, but instead Hayden uses them to pull himself up into a full stand. Add to that his insanely refined sense of balance and growing confidence, and you end up with a kid that causes us to be both simultaneously extremely proud and entirely terrified at the same time. 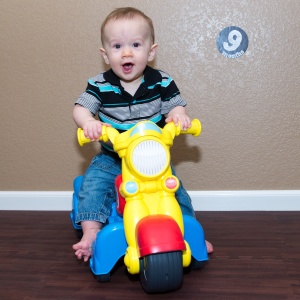