I think Kim and I are very lucky to have this little man in our lives. Aside from being everything we ever could have hoped for in a kid, we’re also told we got very lucky with how little trouble he provides us. Aside from sleeping through the night, which he does like a champ, he’s also rarely fussy, easy to entertain, and is very easy going. With our feeding schedule, his “input” needs are easy to predict and plan around, and for the most part his “output” is regular enough that the guessing game of “why is my son whining” has become fairly easy as well.

Getting to be this little guy’s dad is just an amazing feeling. Sometimes I’ll just sit him on my lap, and we’ll have a whole conversation about nothing at all in language that presumably only he can understand. He loves to make all sorts of noises and will watch the mouth of the person he’s talking to and attempt to mimic the mouth movements. By far one of the most funny things he does is the facial expressions that he associates with each of the sounds. Sounds that are closer to his cry will cause him to scrunch his face, while “O” sounds require wide open eyes for the full effect.

His laughs have also got far more frequent, but he doesn’t always associate the same thing with laughter. For instance, Kim got him to laugh like crazy while playing a game of peek-a-boo, but the same game played with me resulted in a furrowed brow. You win some and lose some I guess. To a certain extent, he likes surprises unless the surprise is loud and then he’ll probably end up crying. During a rousing game of make noises that make the baby laugh, a quick head movement (surprise!) by yours truly with the sound of a whoosh (loud!) caused a fairly substantial crying session.

By far my favorite thing about him at this age is seeing his personality begin to develop. Aside from the abundance of laughter and easy-going nature, he’s also very interested in colors, shapes, and sounds. Toys that are colorful are nice, if they have an interesting shape they are even better, but colorful toys with an interesting shape that make a noise are even better. His favorites right now are crinkling noises and things similar to crinkling noises. He enjoys having the dogs around, as long as they don’t get too close to his face. He’s also not real happy when it’s too warm in the house (much like myself), enjoys a good nap, and maybe even a long walk on the beach (gotta get that walking part down first). 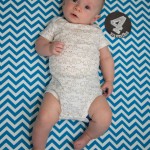 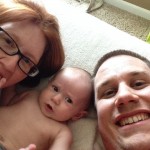 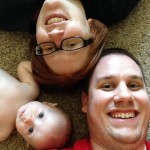