What a difference a month can make. Not only is Hayden turning into a fantastic little kid, it’s also the start of a new era for him (and us): daddy being home.

Since just before his birth in February, Kim has been off work. His last 5 months of life have been spent more or less with mom always around. Due to a myriad of reasons, Kim will have to go back to work for at least another school year. After Hayden was born, I took a 2 week vacation from work to help get things done while we were both exhausted. Now that Kim’s time to return to work is almost here, my time off with him has begun. I’m taking about 9 weeks off from work to spend time with The Kid, as well as give us the time to figure out the transition of us both going back to work. It’s going to be a very different next couple of weeks for the three of us, but I think it will help us all grow a bit as parents and as a family.

So aside from all of that, our little booger has been growing and continuing to develop a little personality. For what seems like forever now, Hayden has been sleeping through the night. We have a fairly predictable schedule for feeding and most diaper changes, and it’s made us all a little more sane. One of the greatest little parts to my day, is that first 7am wake up. His face lights up at the sight of his mom and I standing over his crib, and even though he’s still sleepy, he puts on what is undeniably one of the cutest little baby faces.

It’s that little face that I feel the need to remember later in the day though. Occasionally, he’ll hit a wall between bottles, naps, and diapers. When he does, no amount of parental attention, toys, sitting, pretending to stand, or any of the usual tricks work. Instead, he devolves into a little fussy ball of whine, and sometimes it’s hard to remember that little smiling face from the morning. But then, just when you think the whining has hit critical mass, he’ll give you this look, a look that I imagine only works on his parents, that hints at what will make this all come to an end. Sometimes, it’s a quick nap on mommy or daddy, other times, an early bottle followed by a nap, or even just a ride in his swing where he’ll take a nap. Basically, the kid really likes naps (much like his old man).

So aside from being a great napper, he’s also had a bunch of “firsts” this month. From his first ride through a car wash to his first 4th of July fireworks show, he’s had a lot of exciting times (for a 4 month old anyway). He’s getting stronger and can hold his head up and look around like he’s been doing it all his life. Rolling over from his belly to his back is becoming far more routine, and standing with the help of mommy and daddy is so much fun, he sometimes forgets to keep his legs pushing down on the ground. He really likes to try and hold the bottles when you feed him, but sometimes he gets a finger or two or four stuck in his mouth at the same time. We’re still working on how the vacuum effect works on his bottles, but we’re getting there. It turns out that it’s far easier for a now five month old to understand that whining can get mommy and daddy’s attention then the concept of negative pressure as a milk delivery system.

That’s it for now, so we’ll do the traditional post finish with some pictures and stats. 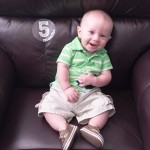